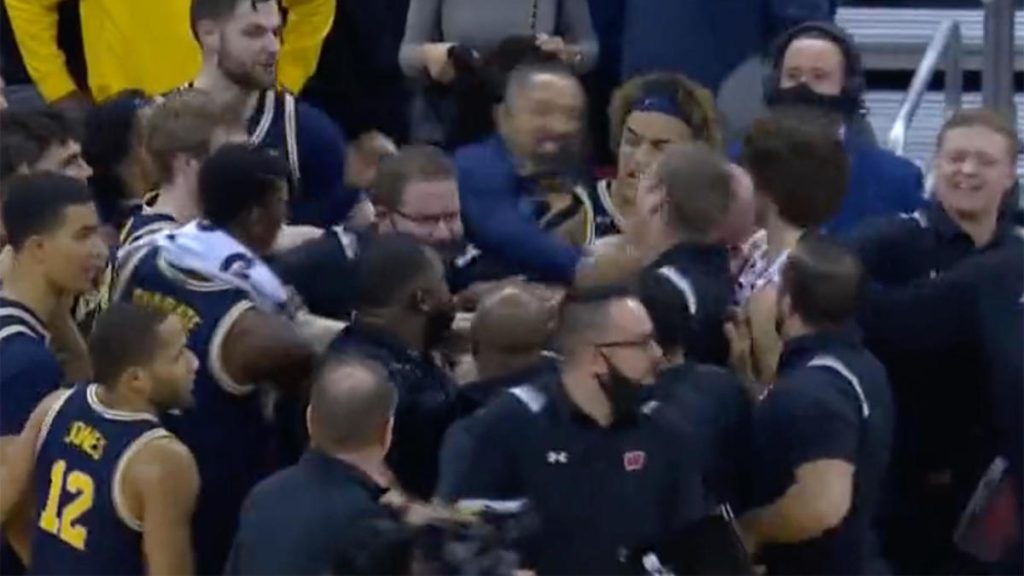 Chaos broke out after he took care of No. 15 from Wisconsin Michigan, 77-63, Sunday afternoon in Madison, Wisconsin. What began as an intense post-game handshake line exchange between Michigan coach Joanne Howard and Wisconsin coach Greg Gard quickly escalated into an all-out brawl involving players and coaches from both teams.

The frenzy erupted shortly after the last century when Jared encountered Howard, who seemed to be slow to enter the handshake line, near the recorder’s table. Jared physically prevented Howard from getting past him and words exchanged before tensions quickly escalated.

Howard thrust his finger in Jared’s face, which led to an even fiercer discussion, before Howard swung into Wisconsin assistant coach Joe Krabenhoft and slotted in a direct kick. Things quickly escalated from there as the players got into a brawl.

Jared called the timeout as the Badgers led 76-61 with just 15 seconds left in the game. The decision seemed to upset Howard, which ultimately led to post-match tension.

“Apparently, he didn’t like that I called a timeout to reset the 10-second call,” Jared told CBS Sports about Howard’s comments leading up to the accident. “We only had 4 seconds to get past the half-court. I didn’t want to put players off the bench in this scramble position, so I took the time out. He didn’t like it when he went over the handshake line.”

Howard admitted in his post-match press conference that the late timeout was indeed a cause of heat.

Howard recounted telling Jared that, referring to the late deadline, he would “remember it.” The Michigan coach defended his actions by noting that Jared initiated the call in the handshake line.

“For someone to touch me, I think it was gratuitous,” he said. “That’s what escalated the matter…At that point, I thought it was time to protect myself.”

Speaking to the media after the game, Wisconsin athletics director Chris McIntosh said he has been in touch with Big Ten Commissioner Kevin Warren about the incident and expects the league to act “quickly and aggressively.”

“We have employees who have been affected and injured,” he said. “It is difficult for me to defend our crew and team, who did not instigate this event. This was clearly depicted on TV broadcast today and I am not sure what it will take long to process this.”

“There is no excuse for any of our staff or student-athletes to engage in physical altercations with others, regardless of the triggers,” Manuel said in a statement. “I offered a helping hand and apologised [Wisconsin administration] For completely unacceptable behaviour. We will review the situation more thoroughly and work with the Big Ten conference as they determine disciplinary action and determine if any further disciplinary action is needed.”