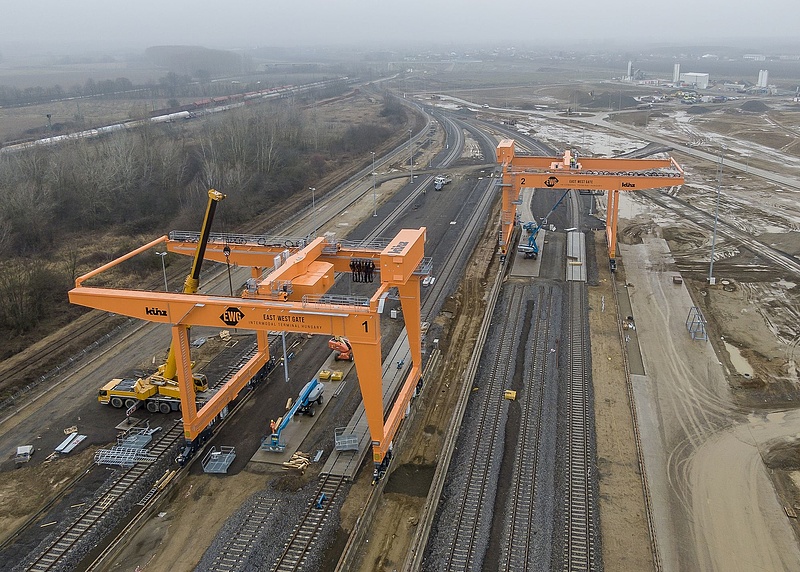 East-West Gateway will be completed in record time: the terminal builders took only one year to complete from start-up. The technical handover and testing of the coastal terminal using 5G technology and green energy will be operational in the first quarter of 2022, while direct operation will begin in the second quarter. The terminal handling transshipment required for rail conversion can handle 1 million 20-foot containers (TEUs) per year, the largest in Europe in terms of theoretical capacity and area.

Excavations on the 140-hectare area (larger than Margaret Island) began in October 2020, and construction began in January this year. At present, the construction of a total of ten kilometers of ordinary and wide railway line has been completed and only additional work is underway on the 225,000 square meters of concrete pavement used for road transport and container storage. . In the central building of the terminal, interior design work is underway, as well as a warehouse, an auto storage room and a container repair workshop.

Kinz, a leading manufacturer of intermodal loading technology in Austria, assembled the terminal at the Szilveslitke terminal with two country cranes, 41-meters wide and 28-meters wide, and 20-meters high. Using the 5G connection, each of the remote-operated giant cranes can carry up to 45 tons of cargo, and they are unique on the continent in terms of the amount and technology used.

A new cargo hub is needed between Asia and Europe

In rail container transport, the lack of capacity causes congestion at existing transshipment stations, leading to significant market demand for a new intermediate terminal in the European transport sector.

Rail freight traffic between Asia – mainly China – Europe is growing at an ever-changing rate, increasing by 56 percent from 2019 to 2020: from 640 thousand TEU to 1.14 million, the expansion will not stop, Janos Talosi said. It continued this year as well. On the current main transshipment route, transshipment at Brest and Malassevich on the Polish-Belarusian border, the total annual capacity is about half a million TEU, so trains have to wait not just hours, but more days. Therefore, suppliers are looking for other directions in Poland or other alternatives such as Kaliningrad. There will be a market demand for about 3 million TEU transactions.

The problems of sea transport – recession, disruptions and significant price hikes – are also increasing the demand for trains. The Russian government will spend a significant amount of money in the coming years to build the railway, the Trans-Siberian Corridor: in 2024, to accelerate the movement of freight trains, in 2017 will increase the volume of rail traffic to four times. Significant improvements have also begun in Kazakhstan, with many relocations being built along the Chinese border – just as the railways in China are normal.

In addition, the EWG expects a further increase in traffic, as the EU’s increasingly stringent environmental regulations favor rail by road transport. By 2035, 15 percent of freight traffic between Asia and Europe is projected to be by rail, with about four million containers per year. Therefore, EWG capability is required without taking work from other terminals already in operation. Incidentally, this is shown by their preliminary talks with their Chinese, Russian, Japanese and Korean partners and announcements of purpose, the company manager said.

The company plans for a gradual upgrade over the first few months, primarily to establish a systematic practice of reloading employees. It is estimated that after 2-3 years of opening they will reach an annual revenue of 300-400 thousand TEUs, which is the maximum limit and the Hungarian railway network can not handle more trains. Therefore, in the industry agreement, they insist on setting up the V0 railroad bypassing Budapest.

The logistics area is being revived

The region of northeastern Hungary and the Hungarian economy benefit only from investment. During the construction we tried to work with local companies and almost half of the work was done by them. Prospective staff will be recruited from the area. The terminal employs 150 people, but with the multiplier effect, it is possible to combine the work of about 500 people with them. Janos Talosi said their goal is to create a home garden to provide adequate housing for young people and to create a terminal to attract staff.

East-West Intermodal Logistics Service Ltd. provides training to specialists in need of high school in Záhony and the University of Nyíregyháza. They build close relationships with many municipalities in the area and help with their social responsibility.

The big advantage of EWG is that it can engage in the development of hundreds of hectares around it. They are now able to create larger storage than the integrated part of the other two terminals in operation. They expect to build a 200-300 thousand square meter warehouse and assembly plant in 3-5 years, mainly for large web marketers who can take advantage of the free zone. In addition to spending hundreds of millions of dollars on the development of the public railway network, the Hungarian state can count on billions in track utilization, customs and tax revenue.

5G, digital dual and green technology in the 21st century

Unique technological developments at the European level are also expected to increase the performance of the terminal over traditional solutions. With programmed, remote transshipment functionality and associated monitoring and security systems, they can do the job faster and more accurately than current transshipers.

They can load three trains at once, and the time to reload one train, including brake testing, is only two hours. The CEO pointed out that since every container, train, truck and person is constantly inspected and monitored from the moment they arrive at the terminal until they leave the terminal, potential breaches and accidental container replacement can be avoided.

For the first time in the world, EWG’s digital dual-Hungary launcher is being built with the help of a logistics hub that processes and operates in real-time in 3D – enabling the design, upgrade and performance of trains, trucks, cranes, transport vehicles and moving goods, in accordance with Industrial 4.0 policies. Thanks to 5G technology, the company can communicate in real time with its Kazakh partner Eurotransit’s China-Kazakh border terminal, significantly speeding up management for incoming exports.

The terminal primarily contributes to the sustainable development of its core operation and eco-friendly rail freight distribution. In addition, it is environmentally conscious in its own function: the facility is implemented with green technology, the power supply is provided by, among other things, a high-performance solar park, solar energy storage system and heat pump system. Only electric terminal tractors and e-cars will be used in the terminal area.

The publication of our article was sponsored by East-West Intermodal Logistics Service Limited.