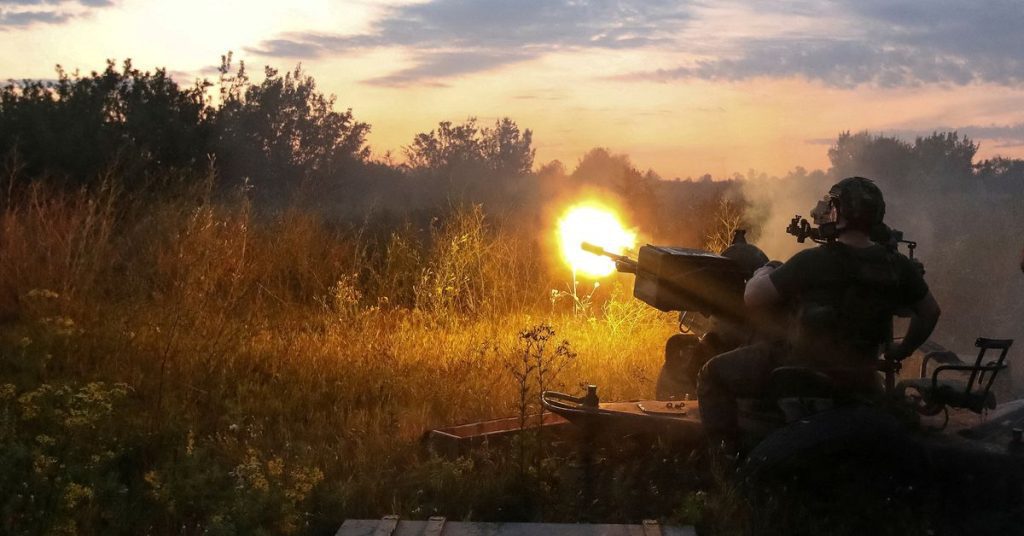 Kyiv (Reuters) – Ukraine accused Russia of firing missiles from the vicinity of a captured nuclear power plant, killing at least 13 people and wounding 10, knowing that retaliation would be dangerous for Ukraine.

Ukraine says the town Russia has targeted – Marhanets – is one that Moscow says its opponents have used in the past to bomb Russian soldiers at the Zaporizhia factory, which they seized in March.

President Volodymyr Zelensky said on Wednesday that Ukrainian forces would respond to the bombing of the Maranits. The Ukrainian military said Russia also bombed several other areas in the Zaporizhzhya region, including the coal-mining town of Vohlidar.

The mayor of Nikopol, a Ukrainian-controlled town near Marhanets across the Dnipro River from the nuclear plant, said on Telegram that Russian bombing had hit a nearby community almost every night for the past week.

Zelensky called on foreign allies to send more powerful weapons, and said in a late-night video address that Kyiv “will not leave today’s Russian bombing of the Dnipropetrovsk region unanswered.”

He said that the Ukrainians and their allies should think about “how to inflict as much casualties on the occupiers as possible in order to shorten the war”.

Ukraine and Russia have accused each other of endangering the plant, Europe’s largest nuclear complex, with close-in attacks.

After the United Nations’ atomic energy agency sounded the alarm about a potential nuclear disaster, the Group of Seven major industrialized nations on Wednesday asked Russia to hand over the plant to Ukraine.

There were no indications that their demand would affect Moscow, which on Wednesday won strong support from China for its rationale for invading Ukraine on February 24.

Beijing’s ambassador to Moscow, Zhang Hanhui, accused Washington of backing Russia into the corner through repeated expansions of the Western-led NATO military alliance and backing Ukraine’s alliance with the European Union.

“Washington’s ultimate goal is to exhaust and crush Russia with a protracted war and the baton of sanctions,” Zhang was quoted as saying.

Beijing is also engaged in a standoff with the United States over Taiwan: since the visit of US House Speaker Nancy Pelosi, China has been conducting extensive military exercises around the self-governing island it claims to own.

Russia has not commented on Ukrainian allegations of an attack on the Maranes, and Reuters has not been able to independently verify Kyiv’s account. Moscow says it does not deliberately target civilians in what it calls its “special military operation” aimed at protecting its security against NATO expansion.

Ukraine and the West accuse Moscow of waging an aggressive, imperial-style war without provocation.

A Ukrainian soldier fires with a ZU-23-2 anti-aircraft gun at a position near the front line in the Kharkiv region, as Russia’s offensive on Ukraine continues, on August 10, 2022. REUTERS/Vyacheslav Madevsky

Andrei Yermak, Zelensky’s chief of staff, said Russia was launching attacks with impunity from Zaporizhzhya, knowing that it was dangerous for Ukraine to resist.

“The cowardly Russians can’t do anything more, so they hit the hiding towns at the Zaporizhia Atomic Power Plant,” he said on social media on Wednesday.

Ukraine says about 500 Russian soldiers carrying heavy vehicles and weapons are at the plant, where Ukrainian technicians continue to work.

Ukraine’s state nuclear energy company has warned that containers containing radioactive materials could be bombed and said it was necessary for Kyiv to restore the plant by winter. Russia is accused of wanting to connect the facility to its own electricity grid.

Russia says its forces act responsibly and ensure the safety of the complex.

More than 20 buildings were damaged in the town on the other side of the Dnipro River from the power plant, Valentin Reznichenko, the governor of central Ukraine’s Dnipropetrovsk region, said.

Pictures provided by Ukrainian officials showed a school corridor littered with rubble with smashed windows and an apartment building smashed by a missile.

Moscow pressed its campaign on several fronts on Wednesday. The Ukrainian military reported that Russian forces bombed about 28 towns in the northeast, southwest and south, including the Kharkiv, Donetsk and Kherson regions. The Ukrainian General Staff said in an unverified statement that the Ukrainian counter-attacks had mostly forced the Russian forces to retreat.

The governor of the Sumy region, located on the Russian border northwest of Kharkiv, Dmytro Zevitsky, said on Telegram that at least five local communities faced Russian shelling and small arms fire.

Pro-Russian separatists in the occupied eastern city of Donetsk accused Ukraine of bombing a brewery on Wednesday, killing one person and causing an ammonia leak, Interfax news agency said.

Reuters was unable to confirm the battlefield reports.

Support for the economy

The war crushed the Ukrainian economy, but there was some relief on Wednesday when external creditors backed Kyiv’s request to freeze payments of nearly $20 billion in international bonds for two years. This should avoid a messy default.

While Kyiv hailed the move as a sign of solidarity from private investors abroad, Ukrainian Prime Minister Denis Shmyal said the deal would save his country nearly $6 billion.

“These funds will help us maintain macro-financial stability, enhance the sustainability of the Ukrainian economy and improve the strength of our military,” he said. Read more

In another rare positive step for Ukraine, the United Nations said it expected a significant increase in orders to ships to export its grain under a deal brokered aimed at easing global shortages and rising prices. Read more