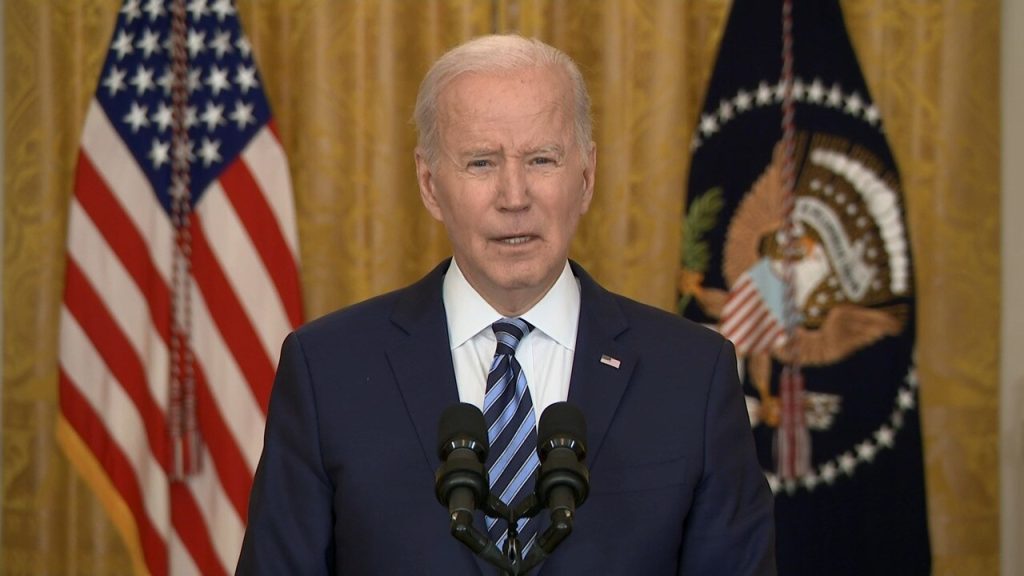 “If we don’t act against him now with these important sanctions, he will be emboldened,” Biden said at the White House on Thursday afternoon. Putin chose this war. Now he and his country will bear the consequences.”

The sanctions target not only Russia’s largest state-owned banks, but also a number of Russia’s political and business elites. It also targets companies in nearly every major sector of the economy, from mining and metals to telecommunications and railways.

“These sanctions are really economic warfare in response to a military invasion,” said John E. Smith, a former head of the Treasury’s Office of Foreign Assets Control and now a partner at the law firm Morrison & Foerrester. “They are the most dramatic and powerful we’ve seen in the post-Cold War era against a major economy like Russia.”

Although sanctions and export controls are unlikely to prompt Putin to withdraw his forces from Ukraine, they will have an immediate impact on the financial sector, lead to a further decline in the ruble, possibly trigger capital flight, and send a strong signal, analysts say. Much of the world opposes Russia’s fueling of the largest military aggression in Europe since World War II.

Among the list of targets is Gazprom, the largest Russian gas company, which for the first time will be prevented from raising capital in Western markets. Biden has tried to stabilize financial markets by saying that energy payments to Russian producers are exempt from sanctions through late June, Brian O’Toole, a former senior Treasury official noted. Punishing Gazprom, he said, “The management is interfering [Russian] energy.”

“They are trying to calm the markets while at the same time showing Russia that energy is completely off the table,” O’Toole said.

The Biden administration and its allies and partners are also working to cut off Russia’s access to key components such as semiconductors, which are essential to its emerging, high-tech industries. The administration exercises a new export control — called the foreign direct product rule — that restricts the sale of semiconductors, computers, avionics and other similar products to Russia from anywhere in the world if they are made using US software, tools, or technology. Significantly, Canada, Australia, Japan, Britain, and the European Union have adapted existing export controls to accommodate the new US rule.

“I’ve never seen anything like this in any context where allies changed their rules to be more like those of the United States,” said Kevin Wolf, a former senior Commerce Department official who was in charge of export controls in the Obama administration. “This shows an extraordinary amount of work and coordination with allies.”

The semiconductor industry, which could have lobbied hard against export controls, issued a statement Thursday saying it was “fully committed” to complying with the new rules. SIA President and CEO John Neuffer said: “While the impact of the new rules on Russia may be significant, Russia is not a significant direct consumer of semiconductors.”

Biden emphasized that the coalition of countries working with the United States represents more than half of the global economy, and that sanctions “will impose huge costs on the Russian economy, both immediately and over time.”

“We deliberately designed these sanctions to maximize the long-term impact on Russia and minimize the impact on the United States and our allies,” Biden added.

Biden administration identified A number of people considered Russian elites and their family members those targeted by the latest sanctions. Among them is Sergey B. Ivanov, a former top Putin aide; Ivanov’s son, Sergey S. Ivanov, CEO of the state-run Alrosa diamond company, which was also sanctioned Thursday; Igor Sechin, a close ally of Putin who runs Russian oil giant Rosneft; and executives of VTB Bank Andrei Bochkov and Yuri Solviev.

Biden noted that the partners joining the United States include the 27 member states of the European Union, including France, Germany and Italy, as well as Britain, Canada, Japan and Australia. “We will limit Russia’s ability to do business in dollars, euros, pounds and yen to be part of the global economy,” he said, as well as its ability to fund its military.

Biden noted that the United States is targeting Sberbank, Russia’s largest bank, which alone owns more than a third of Russia’s banking assets. Washington is also imposing sanctions on Russia’s second largest bank, VTB, not only freezing its assets but also cutting it off from all transactions with US companies, individuals and other entities.

With Thursday’s actions, he said, “we have now imposed sanctions on Russian banks that collectively hold approximately $1 trillion in assets.”

Edward Fishman, an associate fellow at the Center for a New American Security and a former State Department official who worked on sanctions in the Obama administration, said Thursday’s sanctions “will not only cause significant financial disruption, but also indicate that no sector of the Russian economy is outlawed.” .

Smith said the sanctions have caused concerns about spillovers among global banks. But most of them have learned how to spread their dangers. Therefore, he said, even though some of them have reached their bottom line, “it should be within reach of most people.”

Announcements of new sanctions also came from leaders of the other Group of Seven nations, after Ukrainian President Volodymyr Zelensky appealed to foreign leaders to impose far-reaching sanctions on Russia.

See also  Nepal: A shocking video allegedly shows the final moments inside the cabin before a fatal plane crash

British Prime Minister Boris Johnson said Thursday that Britain will impose sanctions on more than 100 entities, companies and individuals, and freeze the assets of five Russian rulers with close ties to the Kremlin. He said that the assets of all major Russian banks in Britain would be frozen and excluded from the British financial system.

Canadian Prime Minister Justin Trudeau announce The sanctions target 58 individuals and entities. Canada will no longer issue export permits to Russia and has canceled hundreds of existing permits worth over $545 million.

Not on the table in Europe right now, according to Biden: Russia’s exclusion from the Society for Worldwide Interbank Financial Telecommunication (SWIFT), a secure messaging system that connects thousands of financial institutions around the world.

In any case, analysts – and Biden himself – say that isolating Russia from SWIFT is not the same as the effect of a complete ban on Russian banks. “The sanctions we have imposed go beyond Swift,” Biden said.

Congressional Republicans — and some Democrats — have urged Biden to take more action, including personally punishing Putin.

Lift the severity of the sanctions until the end. “Don’t hold back,” said Senate Minority Leader Mitch McConnell (R-Kentucky).

For his part, Biden declined to say on Thursday whether he plans to punish Putin, saying only: “It’s on the table.”

Putin told state media on Thursday that Russia was ready for new sanctions and restrictions.