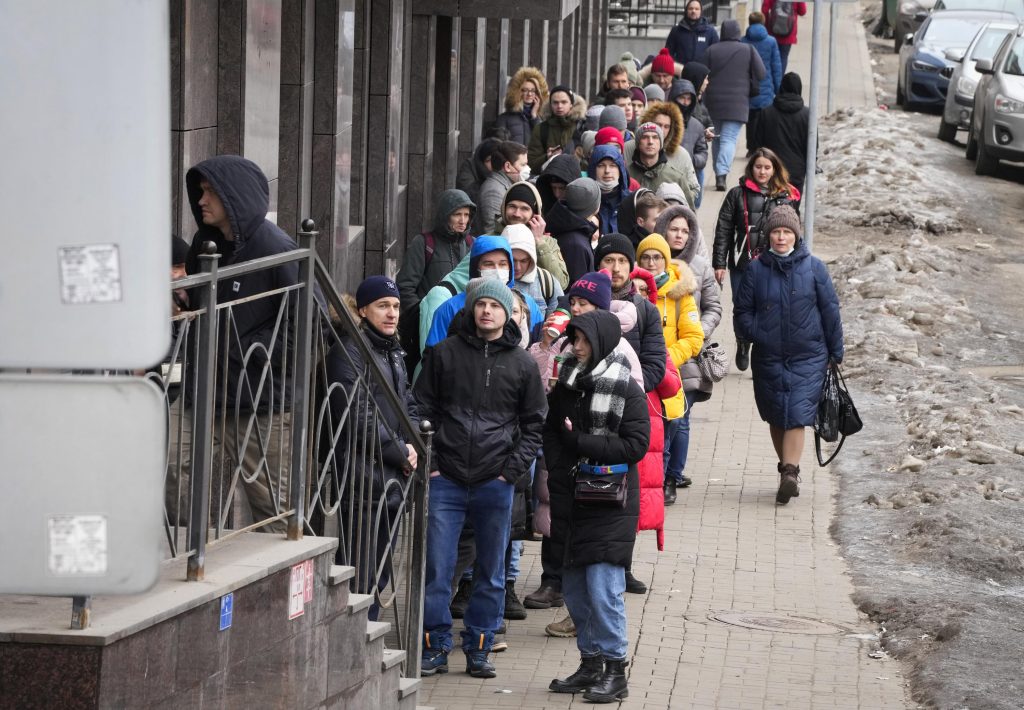 Moscow (AFP) – Ordinary Russians have faced the prospect of rising prices and reduced travel abroad due to Western sanctions over the invasion of Ukraine. It caused the ruble to plummet, sending restless people queuing at banks and ATMs on Monday in a country that has seen more than one currency disaster in the post-Soviet era.

The Russian currency fell by about 30% Against the US dollar after Western countries announced steps to block some Russian banks from the international payment system SWIFT and to restrict Russia’s use of its huge foreign exchange reserves. The exchange rate later regained strength after a swift move by the Russian Central Bank.

But the economic pressure became tougher when the United States announced more sanctions later on Monday to paralyze any assets of the Russian Central Bank in the United States or held by Americans. The Biden administration estimated that the move could affect “hundreds of billions of dollars” of Russian funding.

Tyler Kostra, associate professor of politics and international relations at the University of Nottingham, said he could not remember a similar example from the past of an economy being brought to its knees by global sanctions.

“This West is causing a currency crisis for Russia,” said Kostra, who studies economic sanctions.

Russians, worried that the sanctions will deal a severe blow to the economy, have been flocking to banks and ATMs for days, with reports on social media of long queues and machines running out. People in some Central European countries also rushed to withdraw money from subsidiaries of state-owned Sberbank in Russia After being subjected to international sanctions.

Economists and analysts said that a sharp depreciation of the ruble will mean a decrease in the standard of living of the average Russian citizen. Russians still rely on many imported goods and the prices of these items, such as iPhones and PlayStations, are likely to rise. Traveling abroad will become more expensive because rubles buy less currency abroad. The deeper economic turmoil will come in the coming weeks if price shocks and supply chain issues cause Russian factories to close due to lower demand.

“This economy is going to spread very quickly,” said David Feldman, professor of economics at William & Mary in Virginia. Anything that is imported will see the local cost rise in the currency. And the only way to stop it is to provide great support.”

Kostra said Russia has moved to produce many goods domestically, including most food, to protect the economy from sanctions. He predicted that some fruit, for example, that could not be grown in Russia “will suddenly be much more expensive.”

Kostra said electronics would be a pain point, as computers and mobile phones would have to be imported and the cost would rise. Even foreign services such as Netflix may cost more, although such a company can lower their prices so that the Russians can still afford them.

The Russian government will have to step in to support declining industries, banks and economic sectors, but without access to hard currencies such as the US dollar and the euro, it may have to resort to printing more rubles. It’s a move that can quickly turn into hyperinflation.

The ruble’s decline brought back memories of previous crises. The currency lost much of its value in the early 1990s after the end of the Soviet Union, with inflation and loss of value prompting the government to get rid of three zeros from the ruble coins in 1997. Then came further declines after the 1998 financial crisis in which many depositors lost their savings and another plunge In 2014 due to low oil prices and sanctions imposed after Russia seized the Crimean peninsula in Ukraine.

The Russian Central Bank immediately acted to try to stem the ruble’s decline. He raised the key rate sharply in a desperate attempt to prop up the currency and prevent a bank run. It also said the Moscow Stock Exchange would remain closed on Monday.

The bank raised its benchmark interest rate to 20% from 9.5%. This came after a Western decision on Sunday to freeze Russia’s hard currency reservesIt is an unprecedented move that could have severe consequences for the country’s financial stability.

It was not clear exactly what share would cripple in Russia’s estimated $640 billion hard currency pile, some of which is held outside Russia. European officials said at least half would be affected.

This significantly increased pressure on the ruble by undermining the financial authorities’ ability to support it by using reserves to purchase rubles.

Kremlin spokesman Dmitry Peskov described the sanctions, which included freezing Russia’s hard currency reserves, as “heavy,” but said on Monday that “Russia has the necessary capabilities to offset the damage.”

The steps taken to prop up the ruble are themselves painful because raising interest rates can stifle growth by making companies’ access to credit more expensive. Koskra said that Russians who have borrowed money, such as homeowners with mortgages or business owners who have borrowed, may also be hurt by the central bank’s decision to double interest rates.

The central bank ordered other measures to help banks deal with the crisis by injecting more liquidity into the financial system and easing restrictions on banking operations. At the same time, it temporarily prevented non-residents from selling government obligations to help relieve pressure on the ruble from panicked foreign investors trying to make money from these investments.

The ruble fell about 30% against the US dollar early on Monday but stabilized after the central bank’s move. Earlier, it traded at a record low of 105.27 per dollar, down from around 84 per dollar late Friday, before recovering to 94.43.

The sanctions announced last week brought the Russian currency to its lowest level against the dollar in history.