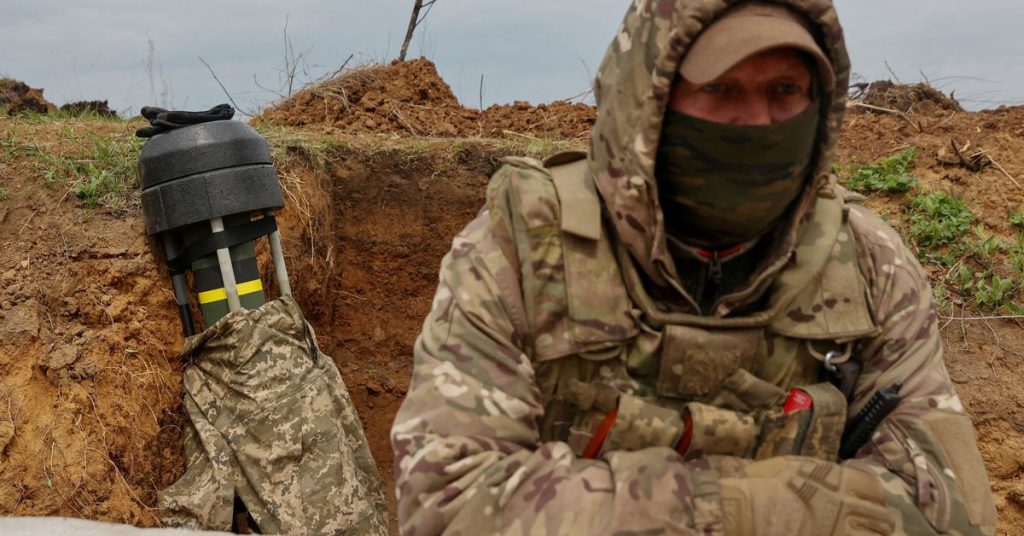 Ukrainian officials said their soldiers would withstand the attack, calling it the Battle of Donbass. But the Russians pressed the advance across almost the entire length of the Eastern Front and, hours after its start, captured a city on the front line.

In the ruins of the southeastern port of Mariupol that suffered nearly eight weeks of siege, Russia gave the last Ukrainian defenders holed up in steelworks an ultimatum to surrender by noon (0900 GMT) or die. The deadline passed without telling us their fate.

Kyiv’s chief negotiator said it was difficult to predict when peace talks would resume due to the siege of Mariupol and the new offensive.

In a swift response to the massive attack, US President Joe Biden and other Western leaders discussed increasing military, economic and humanitarian support for the Kyiv government and ways to hold Moscow to account, the White House said.

Schulz said the Allies agreed that Russia should not win the war, and that peace imposed as envisioned by Russian President Vladimir Putin was unacceptable.

The Italian government said there was “wide consensus on the need to step up pressure on the Kremlin, including by adopting more sanctions, and increasing Moscow’s international isolation”.

The city has been captured

Ukraine said the new attack resulted in the capture of Kremina, an administrative center of 18,000 people in Luhansk, one of Donbass provinces.

Serhiy Gaidai, governor of the Luhansk region, said Russian forces were attacking “from all sides”, authorities were trying to evacuate civilians, and it was impossible to count civilian deaths.

“No matter how many Russian troops they send there, we will fight. We will defend ourselves,” President Volodymyr Zelensky told the Ukrainians in a video address overnight.

Russian Foreign Minister Sergei Lavrov confirmed in Moscow that “another stage of this process has begun.” Defense Minister Sergei Shoigu said Russia was “systematically” implementing its plan to “liberate” Donetsk and Luhansk, two provinces that Moscow is demanding to cede Kyiv entirely to Russian-backed separatists.

Motivated by Ukrainian forces in March from an attack on Kyiv in the north, Russia instead sent its forces to the east for the Donbass offensive. It also launched long-range strikes on other targets, including the capital.

The coal and steel-producing Donbass region has been the focal point of Russia’s campaign to destabilize Ukraine since 2014, when the Kremlin used proxies to create breakaway “people’s republics” in parts of Luhansk and Donetsk provinces.

A Ukrainian soldier stands next to a Javelin anti-tank missile, as Russia’s offensive on Ukraine continues, at a post in Donetsk region, Ukraine, April 18, 2022. REUTERS/Serhii Nuzhnenko/File Photo

Moscow now says its goal is to take over the entire provinces on behalf of the separatists. Ukraine has a large force defending the northern parts of Donbass and military experts say Russia aims to isolate or encircle them.

But Russia still needs to maintain the supply of its forces across miles of hostile territory. Ukraine launched a counterattack near Kharkiv at the rear of Russia’s advance, apparently with the aim of cutting supply lines.

Since it began what it calls a special operation to disarm Ukraine on February 24, Russia has bombed cities to rubble and hundreds of civilian bodies have been found in the towns where its forces withdrew. It denies targeting civilians and says, without evidence, that terrible atrocities were planned.

Residents are in shock

In Mariupol, which saw the heaviest fighting of the war and worst humanitarian disaster, a last group of Ukrainian defenders steadfast at Azovstal’s steelworks defied Russian calls to surrender and be rescued.

However, Interfax news agency, citing Russian state television, reported that about 120 civilians living next to the sprawling factory had left via humanitarian corridors.

The pro-Kremlin Chechen leader whose forces are fighting in Mariupol predicted that the troops would take the factory on Tuesday.

Mariupol has been under siege since the early days of the war. Tens of thousands of people were trapped without food or water and corpses littered the streets. Ukraine believes that more than 20,000 civilians were killed there.

Capturing it would link the pro-Russian separatist lands to Crimea, which Moscow annexed in 2014.

In the Russian-controlled areas reached by Reuters, shocked residents are cooking over open fires outside their damaged homes.

“It is clear that against the background of the Mariupol tragedy, the negotiation process has become more complicated,” Ukraine’s chief negotiator, Mikhailo Podolyak, told Reuters.

Kyiv and Moscow have not held face-to-face talks since March 29. Each side blames the other for their collapse.

“It is difficult to say when the next round of direct negotiations will be possible because the Russians are seriously betting on the so-called ‘second phase of the special operation’,” Podolyak said.

Reuters journalists saw the bodies of three people, apparently killed by shrapnel, lying on the sidewalk.

“They’re ruining the whole city,” 79-year-old Fyodor Bondarenko said as he watched one dead body in an ambulance as shelling roared in the background.