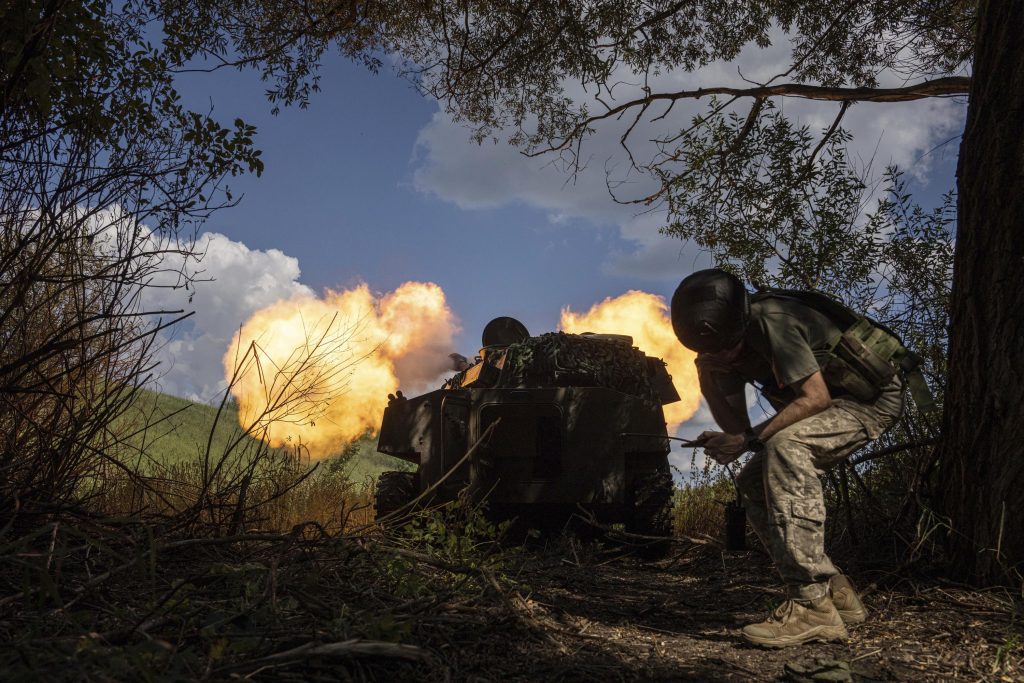 Kyiv, Ukraine (AP) – Russian forces launched a missile attack on the Kyiv region for the first time in weeks Thursday and also bombed the northern Chernihiv region, in what Ukraine described as revenge for standing up to the Kremlin.

Meanwhile, Ukrainian officials announced a counterattack to retake the occupied Kherson region in the south of the country, territory captured by Russian President Vladimir Putin’s forces early in the war.

Russia attacked the Kyiv region with six missiles fired from the Black Sea, hitting a military unit in the village of Lyutyg on the outskirts of the capital, according to Oleksiy Harumov, a senior official of the Ukrainian General Staff.

He said the attack destroyed a building and damaged two others, and Ukrainian forces also dropped one of the missiles in the town of Bucha.

The governor of Kyiv region, Oleksiy Kuleba, said 15 people were wounded in the Russian strikes, five of whom were civilians.

Kuleba linked the attacks to State Day, a celebration held by President Volodymyr Zelensky last year and which Ukraine celebrated on Thursday.

“Russia, with the help of missiles, takes revenge on the large-scale popular resistance, which the Ukrainians were able to organize precisely because of the presence of their state,” Kuleba told Ukrainian television. “Ukraine has already broken Russia’s plans and will continue to defend itself.”

The governor of the Chernihiv region, Vyacheslav Chaus, reported that the Russians also fired missiles from Belarusian territory at the village of Honsharevska. The Chernihiv region has not been targeted for weeks.

Russian forces withdrew from the Kyiv and Chernihiv regions months ago after failing to capture either. The renewed strikes come a day after the leader of the pro-Kremlin separatists in the east, Denis Pushlin, urged Russian forces to “liberate the Russian cities founded by the Russian people – Kyiv, Chernihiv, Poltava, Odessa, Dnipropetrovsk, Kharkiv, Zaporizhia, Lutsk…”

Kharkiv, Ukraine’s second largest city, was also bombarded overnight, according to the mayor. The authorities said that a police officer was killed in a Russian bombing of a power station in the Kharkiv region.

The southern city of Mykolaiv was also shot, where one person was reported injured.

Meanwhile, the Ukrainian army continued its counterattack in the Kherson region, canceling the main bridge. Over the Dnieper River on Wednesday.

Ukrainian media quoted Ukrainian presidential adviser Oleksiy Aristovich as saying that the operation to liberate Kherson is underway, as Kyiv forces plan to isolate Russian forces and leave them with three options – “retreat, if possible, surrender or destroy.”

The Russians are concentrating maximum forces in the direction of Kherson, said Oleksiy Danilov, Secretary of the National Security and Defense Council of Ukraine, warning: “A very large-scale movement of their forces has begun.”

The British military says Ukraine has used its new long-range artillery supplied by the West to damage at least three bridges across the Dnieper River on which Russia relies for its forces.

The Ukrainian presidential office said, on Thursday morning, that the Russian bombing of cities and villages during the past 24 hours had killed at least five civilians, all of them in the eastern province of Donetsk, and wounded nine.

Fighting in recent weeks has focused on Donetsk Province. The fighting has intensified in recent days, with Russian forces apparently coming out of a “stop operation” after capturing the neighboring Luhansk province.

“Rocket terrorism again. We will not surrender. Donetsk region governor Pavlo Kirilenko said in Telegram … We will not be afraid.

Military analysts believe that Russian forces are focusing their efforts on capturing the cities of Bakhmut and Seversk in Donetsk Province.

Zelensky created State Day to remind Ukrainians of the country’s history as an independent state. The celebration honors Prince Vladimir, who made Christianity the official religion of the medieval state of Kievan Rus’ over 1,000 years ago.

“You can say that for us, every day is State Day,” the president said in a State Day speech.

The Kremlin also demands the heritage of Kievan Rus’. In 2016, Putin erected a monument to Prince Vladimir near the Kremlin.

Follow the AP’s coverage of the Russia-Ukraine war at https://apnews.com/hub/russia-ukraine