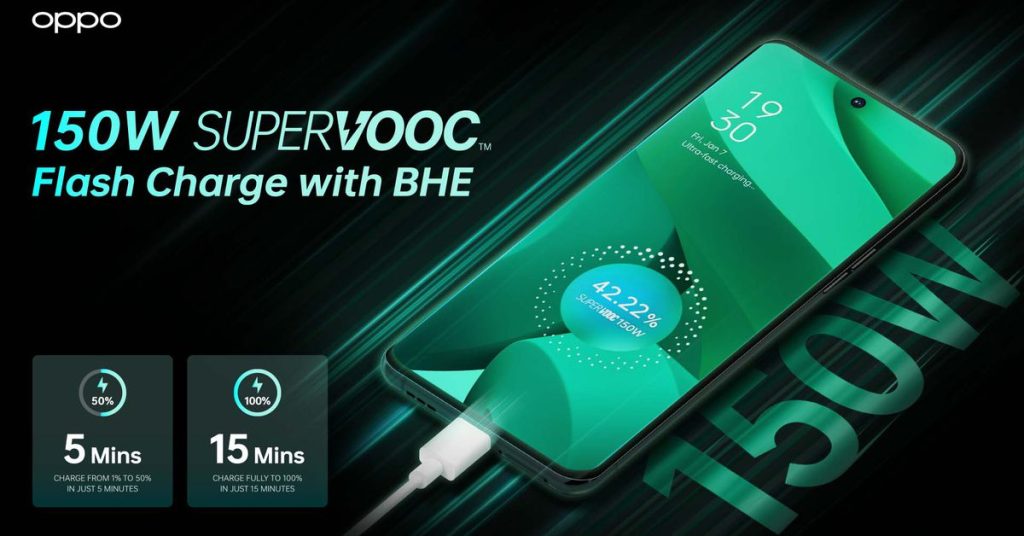 Oppo announced a new 150W SuperVOOC fast charging standard today which it claims will be able to charge a 4,500mAh battery from 1 percent to 50 percent charge in just five minutes, and to 100 percent in just 15 minutes. An unnamed smartphone from the OnePlus sub-brand in the second quarter of this year. OnePlus also showed off an update for the global launch of the OnePlus 10 Pro, which came to China earlier this year.

OnePlus didn’t provide any other details about the first phone to feature this technology, such as whether it will be a flagship phone or part of the company’s mid-range Nord lineup, but said the technology will be showcased at its booth during this week’s Mobile World Congress in Barcelona.

Realme is also Advertising technology rated as 150W UltraDart. The timing is unlikely to be a coincidence given that Realme is owned by BBK Electronics, which is the parent company of Oppo (and OnePlus). Realme makes similar claims about charging speeds, except that it actually announced the name of the first device to use the technology: GT Neo 3.

150W fast charging is approximately twice the amount of power provided by 80W fast charging oneplus And the OPPO It was used in its latest flagship software. Oppo announced a 125W SuperVOOC fast charging standard in 2020, but it has not yet appeared on a widely released device. Meanwhile Xiaomi last 11T Pro It is charged with 120W fast charging, which Xiaomi said can fully charge the 5,000mAh battery in 17 minutes.

SuperVOOC has long been Oppo’s trademark for fast charging technology, while OnePlus has used Warp Charge technology. But after the merger of the two companies, done by OnePlus Effectively became a sub-brand of OppoIt has discontinued the Warp brand of its fast chargers in favor of SuperVOOC.

Anticipating concerns about the impact of such high-wattage charging on the device’s battery, OnePlus says the battery should maintain up to 80 percent of its rated capacity after 1,600 charge cycles with 150W SuperVOOC thanks to “Battery Health Engine” (BHE) technology. It’s also compatible with other fast charging protocols such as Programmable Power Supply (PPS), Power Supply (PD), and Quick Charge (QC), to allow SuperVOOC to quickly charge non-OnePlus devices, although not the guaranteed 150W charging speed.

Interestingly, Oppo specifically claims that its charging speeds start at 1 percent instead of a completely empty battery at 0 percent. This is likely because he doesn’t want to include the amount of time it takes to go from 0 to 1.

In addition to 150W charging technology, which should come to devices from OnePlus and Realme soon, Oppo is also showing a proof of concept of a 240W fast charging solution. The 240W SuperVOOC charging technology is capable of charging a 4,500mAh battery to 100 percent in just nine minutes, the company says, though it hasn’t announced any immediate plans to commercialize the technology.

These announcements come as OnePlus prepares to launch its latest flagship devices, and OnePlus 10 ProInternationally, after its release in China earlier this year. OnePlus now says it hopes to launch the phone worldwide by the end of March. An exact global launch date has not been announced.

In an interview with the edgeOnePlus CEO Pete Lau explains that the reason why OnePlus chose to prioritize the launch of the OnePlus 10 Pro only in China is to try to better compete in the country’s crowded smartphone market. But he also added that it is easier to launch phones more quickly in the country because there are fewer approval processes that need for its program to move forward with partners such as carriers.

Finally, OnePlus says its interest in producing affordable phones is unchanging, and that it plans to launch its “most expensive 5G smartphone in India and Europe so far” this year.