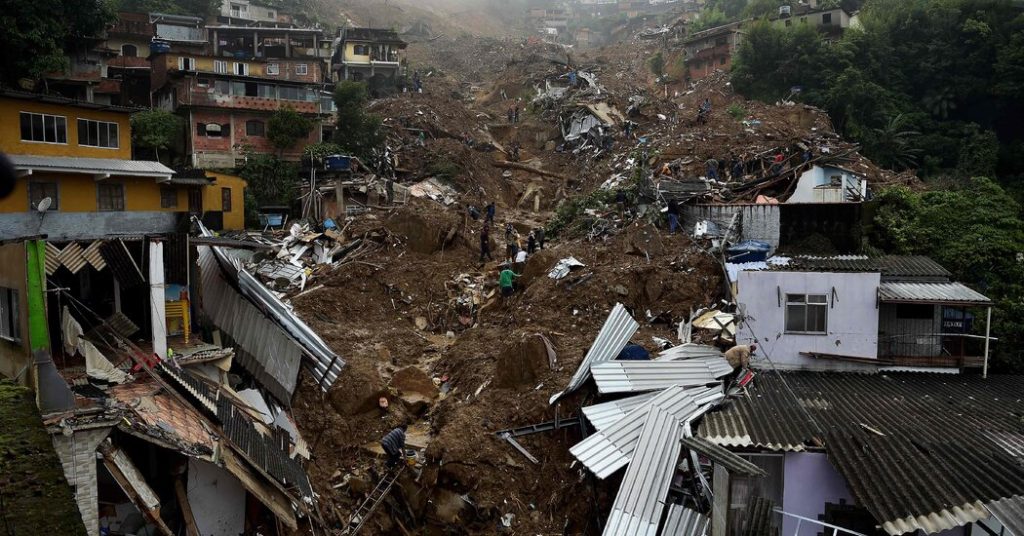 RIO DE JANEIRO (Reuters) – Desperate firefighters and residents searched for victims on Wednesday after powerful mudslides and floods swept through a mountainous region north of Rio de Janeiro, bringing a month of overnight rain and killing at least 94 people.

The mayor of Petropolis, a historic city located in the mountains 70 miles from the beaches of Rio de Janeiro, said the death toll could rise. a Similar disaster More than 900 people were killed in the region in 2011. Many experts say such extreme weather events are becoming more common with global warming.

Heavy rains that began on Tuesday evening triggered mudslides that destroyed dozens of homes on the hillsides above Petropolis and triggered floods that caused further damage in the streets below. Photos and videos on social media showed rivers of mud flowing through the city streets, sweeping everything along the road: cars, trees, and sometimes people.

Brazil’s National Meteorological Institute said the rains that caused the devastation were the heaviest in the city since 1952.

“What we saw was a really very challenging event,” said Cassia de Castro Martins Ferreira, a researcher at the Federal University of Juiz de Fora who studies extreme weather events in the region. “It didn’t rain – it was an extraordinary amount of water pouring down.”

For many Petropolis residents, the disaster was a painful reminder of 2011, when similar mudslides killed more than 900 people in the area – the worst natural disaster in Brazil’s history.

Carlos Eduardo Ribeiro, 22, was among those searching for missing neighbors on Wednesday. Mr. Ribeiro, who lives across the street from a hillside neighborhood that has been engulfed by mudslides, said he was pulling children and elderly people out of the rubble.

“My arm hurts, everything hurts from getting people out of the mud. We have been digging for hours, hoping to find more people,” he said. My friends are missing, their homes are gone, everything is buried in the mud. Here it has turned into a cemetery.”

Petropolis is part of a picturesque area with a major national park and clear forested mountains that has become a haven for people fleeing the sweltering temperatures on the coast. Founded in the middle of the nineteenth century by Brazilian Emperor Pedro IIwhich held the trial there during the scorching summer months.

Its unique geography also makes it vulnerable to heavy rainfall, Castro said. Hot air masses from the coast often collide with the cooler temperatures common at higher altitudes, which can cause storms.

“We have a huge number of extreme weather events in Petropolis, precisely related to its location,” she said. But another danger, she said, “is the way the city has grown.”

As Petrópolis expanded, residents moved into the hills, clearing forests that once served as a buffer against mudslides and building homes on terrain that is often too steep and unsuitable for development.

After the 2011 mudslides, officials made plans to prevent a similar tragedy in the area. But these plans advanced slowly amid funding shortfalls and shifts in political power.

Ms Castro said the top priority in Brazil should be to create more robust systems to alert residents before severe weather events. In Petropolis, only a few neighborhoods are equipped with sirens that warn of weather hazards, while state and local governments still have not installed such systems in other vulnerable places.

Rio de Janeiro state governor, Claudio Castro, said at a press conference Wednesday afternoon that preventive measures are needed to prevent a recurrence of these tragedies.

It is not uncommon for heavy rain to fall during the summer months in Brazil. But most experts agree that extreme weather events are becoming more common. In December, floods At least 20 people were killed and about 50,000 . displaced in the northeast of the country. And last month, dozens were killed in Sao Paulo and Minas Gerais when torrential rains swept the two states.

Jack Nikas Contribute to the preparation of reports.