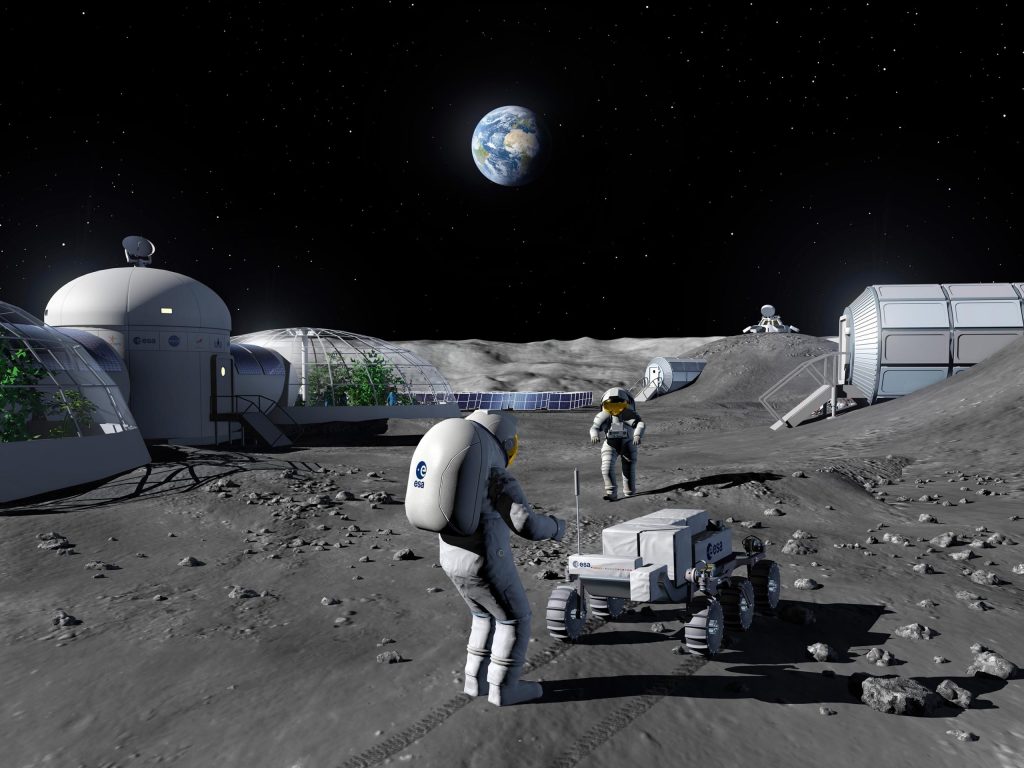 An artist’s impression of the shape of the lunar base. Scientists exploring whether lunar resources could be used to facilitate human exploration on the Moon or beyond have reported that lunar soil contains active compounds that can convert carbon dioxide into oxygen and fuel. Credit: ESA – P. Carril

Soil on the Moon contains active compounds that can convert carbon dioxide into oxygen and fuel, according to a new study by scientists in China and published May 5, 2022 in the journal. joules. They are currently investigating whether lunar resources can be used to facilitate human exploration on the Moon or beyond.

Nanjing University materials scientists Yingfang Yao and Zhigang Zou hope to design a system that takes advantage of lunar soil and solar radiation, the two most abundant resources on the Moon. After analyzing lunar soil brought back by China’s Chang’e 5 spacecraft, the research team found that the sample contained compounds — including iron- and titanium-rich materials — that could act as a catalyst for producing desirable products like oxygen using sunlight and carbon dioxide.

This image shows a sample of lunar soil brought back by the Chinese Chang’e 5 spacecraft. Credit: Yingfang Yao

Based on the observation, the team proposed an “extraterrestrial photosynthesis” strategy. Essentially, the system uses lunar soil to decompose water extracted from the moon and in the astronauts’ breathing exhaust into oxygen and hydrogen powered by sunlight. The carbon dioxide emitted by the lunar inhabitants is also collected and combined with hydrogen from the electrolysis of water during the hydrogenation process stimulated by the lunar soil.

The process produces hydrocarbons such as methane, which can be used as a fuel. The researchers say the strategy uses not external energy but sunlight to produce a variety of desirable products such as water, oxygen and fuel that could support life on the lunar base. The team is looking for an opportunity to test the system in space, likely with future Chinese manned moon missions.

This diagram shows how lunar soil could act as a catalyst for extraterrestrial photosynthesis to produce the oxygen and fuel needed for long-term survival on the Moon. Credit: Yingfang Yao

“We use on-site environmental resources to reduce the missile payload, and our strategy provides a scenario for a sustainable and affordable off-planet living environment,” Yao says.

While the catalytic efficiency of lunar soil is lower than the catalysts available on Earth, Yao says the team is testing different ways to improve the design, such as melting lunar soil into a high-entropy nanomaterial, which is a better catalyst.

This video shows the electrolysis of water driven by photovoltaic cells which is stimulated by lunar soil. Credit: Yingfang Yao

Previously, scientists proposed many strategies for extraterrestrial survival. But most designs require power sources from the ground. for example,[{” attribute=””>NASA’s Perseverance Mars rover brought an instrument that can use carbon dioxide in the planet’s atmosphere to make oxygen, but it’s powered by a nuclear battery onboard.

“In the near future, we will see the crewed spaceflight industry developing rapidly,” says Yao. “Just like the ‘Age of Sail’ in the 1600s when hundreds of ships head to the sea, we will enter an ‘Age of Space.’ But if we want to carry out large-scale exploration of the extraterrestrial world, we will need to think of ways to reduce payload, meaning relying on as little supplies from Earth as possible and using extraterrestrial resources instead.”