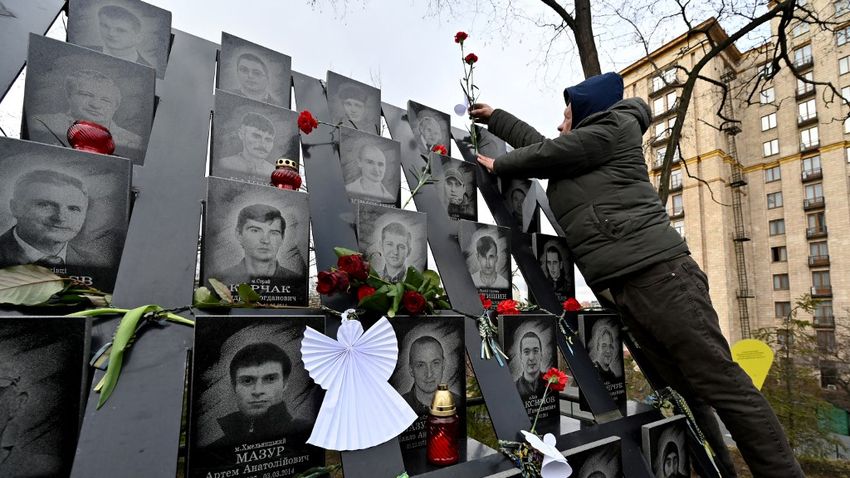 An official statement quoted by Reuters reports that Ukrainian President Volodymyr Zhelensky has not canceled his official visit and is traveling to Germany to attend a security conference in Munich. Zhelensky meets with US Vice President Kamala Harris and makes a fresh plea to Russia to stop her threatening behavior. US President Joe Biden told a news conference Friday that this would not be wise In such a situation you have to leave the country.

Russian-backed separatist leaders in eastern Ukraine announced a full military mobilization a day later on Saturday. He ordered women and children to flee to southern RussiaBecause they think the Ukrainian army is preparing to attack them. The Ukrainians have denied this, and on several occasions the Russians have been preparing to invade Ukraine. Meanwhile, conflicts are becoming more common. They already have a Ukrainian soldier dead.

The Ukrainian military said on Saturday that 12 ceasefire violations had been recorded by pro-Russian protesters and that a total of 66 incidents had taken place in the past 24 hours. Separatist officials also said that several villages had been shot down by Ukrainian forces using heavy artillery on Saturday. Both sides have been blaming each other for violating the ceasefire agreement.

The Kremlin has confirmed that Russian President Vladimir Putin will hold a telephone conversation with French President Emmanuel Macron on Sunday. Macron will first hold talks with Ukrainian President Volodymyr Zhelensky on Saturday.

The article is constantly updated:

16.39 Lufthansa will suspend flights to Ukraine from Monday to the end of February. Dutch airline KLM has already announced on Saturday Stops flying to Ukraine.

Putin watched the exercise from the lodge

15.20 The Russian military on Saturday conducted regular annual exercises with ballistic missiles and maneuvering robotic aircraft, all of which will hit designated targets, the Kremlin said on its website.

The military exercise was announced on Friday by the Russian Defense Ministry, which said it would include troops and equipment from the Russian Air Force and Air Force, the Southern Army District, the Army Missile Force, the Northern Navy and the Black Sea Navy.

Asked if the exercise should not be postponed in light of international tensions, Peskov said on Friday that “fully transparent” military exercises for experts and overseas were currently underway, so there was no reason for anyone to worry. .

According to Stoltenberg, the biggest threat at the moment is a combination of large-scale military mobilization and war rhetoric, creating unfulfilled expectations of the Russian leadership NATO and then threatening military repercussions. Stoltenberg blamed Moscow’s open attack on basic European values ​​and European security, and stressed that NATO members were fully committed to protecting each other.

“Although Moscow is trying to turn the wheel of history by recreating the sphere of influence of its Soviet era, NATO members are united and will take all necessary measures to protect themselves and their allies,” he said.

This is “the most dangerous moment in history … we are on the brink of a European war,” Johnson told a news conference.

Ukraine will not allow itself to be provoked

13:04 Ukrainian President Volodymyr Zhelensky, who attended today’s security conference in Munich, wrote on Instagram that Ukraine has not responded to the Donbass provocations and is seeking a solution exclusively through diplomacy.

The U.S. vice president said it was not possible to forcibly change borders

12.20 Kamala Harris confirmed that the Allies have prepared unprecedented sanctions, targeting Russian financial institutions and key businesses. The US Vice President will address the delegates to the Munich Security Conference. Europe’s security is once again in jeopardy, he said, referring to the worst conflict since World War II. He added: The borders of any state cannot be forcibly changed.

Today I will be presenting ideas at the Munich Security Conference on how the United States, our allies and our partners are expressing strength and solidarity in the face of Russian aggression. https://t.co/aS1TrHDBGN

He believes in diplomacy, but Scholes is not naive

11.40 German Chancellor Olaf Scholes told a conference in Munich that Western leaders were ready to do anything diplomatic but to negotiate without “innocence”. In a Twitter message, he said, “We will be together as friends and partners. Only a Europe of action would be an attractive partner for the United States as its closest friend and partner in values.

According to the Russian Federation, a military occupation force in Ukraine was carried out by the Swiss Confederation. Wire tunes dafür, dass es nicht so weit kommt. We are just now. So diplomacy is still a long way off for Unsproach. # MSC2022

The Hungarian supply was not affected by the pipe explosion

10.54 The explosion in the Lugansk pipeline, which was identified by the RIA Novosti news agency as a friendly pipeline yesterday, was not affected by today’s news. Energy supply in Hungary, The tax in question was not used for transportation. Reuters quoted Sergei Makogon, a Ukrainian transport gas network, as saying on Facebook that there were no pipelines to supply Russian gas to Europe and that European transport exports were unrestricted.

There was also an explosion in Russian territory

10.25 Russian RIA Novosti According to a news agency, a bullet exploded Saturday morning in Russian territory 300 meters from the village of Mitzkinskaya. No injuries were reported.

Ukraine: We have nothing to do with this

10.20 Ukrainians reject Russian accusation of doing so with gas pipeline explosion Bloomberg. “Ukraine has nothing to do with the explosion of a gas pipeline near Luhansk because it has had no control over it since 2014. We firmly believe that Ukraine has nothing to do with what is currently happening in the gas pipeline,” said Yuri Vitrenko, chairman of Naftogaz in 2014. The country confirmed that the pipe was disconnected from the transmission system.

The explosion has no effect on distribution

10.00 Moscow and Kiev, of course, present differently the explosion at a gas pipeline near Luhansk, which is controlled by separatists in eastern Ukraine. The Russian state media Notes that the explosion will not affect Russian gas exports. According to other media sources, the explosion targeted the Friendship gas pipeline, which supplies gas to Europe, which does not really affect the Luhansk region. The state-owned company that runs the pipes said the fire was extinguished soon after. Meanwhile, the OSCE, which has been monitoring the ceasefire between separatists and the Ukrainian military, has announced increased action on the demarcation line.

8.59 The Ukrainian military says a Ukrainian soldier was killed in an artillery attack by separatists in eastern Ukraine on Saturday morning.

On Friday The New York Times reports that despite the promises made by Democrats and Republicans, the US Congress did not accept “the mother of all sanctions” against Russia. The Russians will punish Moscow before invading Ukraine, the former will not. Instead of sanctions, senators denounced President Vladimir Putin’s “provocative” policy in a bustling letter.