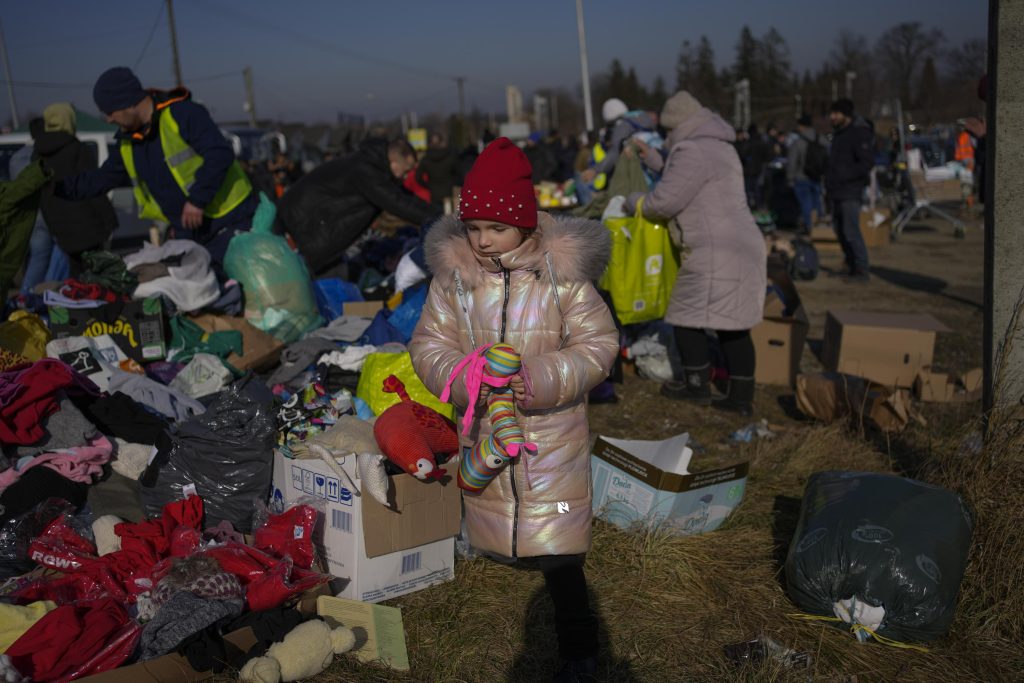 MEDICA, Poland (AFP) – Loading bags and carrying children, tens of thousands of Ukrainians rushed to the border on Saturday as invading Russian forces continued their march toward Ukraine’s capital, Kiev.

At least 150,000 people have fled Ukraine to Poland and other neighboring countries in the wake of the Russian invasion, the United Nations refugee agency said on Saturday. Some walked several miles during the night while others fled by train, car or bus, forming long lines at border crossings. They were greeted by waiting relatives and friends or went alone to reception centers organized by neighboring governments.

“The numbers and the situation are changing minute by minute,” said Jung-Ah Gidini-Williams, a spokeswoman for the United Nations High Commissioner for Refugees. At least 150 thousand people, who are refugees, have fled outside Ukraine. …At least 100,000 people – but probably much more – have been displaced within Ukraine.”

The agency expects that up to 4 million Ukrainians will flee if the situation deteriorates further.

Most of the arrivals were women, children and the elderly after Ukrainian President Volodymyr Zelensky banned men from the age of 18 to 60 from conscription from leaving. Some Ukrainian men were returning to Ukraine from Poland to take up arms against the Russian forces.

Unlike other conflicts around the world, Russia’s unprovoked attack on Western-looking democracy led to a massive outpouring of support for fleeing Ukrainians. This included an unconditional welcome from countries such as Poland and Hungary that were unwilling to accept those fleeing conflict and poverty in the Middle East and Africa.

Ordinary people were also opening their homes to refugees and volunteering at welcome centers. In Poland, a Facebook page was formed where people were offered to ride in special cars from the border and other help.

Volunteers have even come from elsewhere in Europe to bring in refugees, including a German couple from Hamburg who held a sign in the Polish border town of Medica saying they could take three people home with them.

“Our country isn’t doing anything, and we felt like we needed to do something,” said Tanya Schwartz, 51.

Jeremy Myers, from Manchester, England, was on vacation in Ukraine with his Ukrainian girlfriend when the war began. They fled Kiev and waited 23 hours in a fenced area with no food or water that was under the control of armed guards on the Ukrainian side.

Watch people fight and crush and a woman fainted.

“We saw many people getting injured, there were no toilets, there was no medical help,” he said. “You had to stand where you were because if you didn’t lose your place in line.”

One family from Chernivtsi in western Ukraine waited 20 hours before they could cross the border to Syrit in northern Romania. Natalia Murnik, 14, cried, saying goodbye to grandparents who could not leave the country.

The largest numbers have been in Poland, where 2 million Ukrainians have already settled for work in recent years, spurred on by Russia’s first incursion into Ukraine when it annexed Crimea in 2014 and a search for opportunities in the booming economy of its neighbor the European Union.

The Polish government said on Saturday that more than 100,000 Ukrainians have crossed the Polish-Ukrainian border in the past 48 hours alone. Poland has announced that its borders are open to fleeing Ukrainians, even for those without official documents, and has scrapped its requirement to test negative for COVID-19.

The queue of vehicles waiting to enter Poland in Medica stretched for many miles into Ukraine.

A woman from Lviv named Lena described seeing toys and heavy bags along the way that people abandoned. She was bringing her four children to safety in Poland and was planning to return to join her husband. Like other Ukrainians returning home while their country fights Russia, it will only give its first name.

Even Hungarian Prime Minister Viktor Orbán, one of Europe’s most anti-immigrant leaders, traveled to the border town of Pirigsorany, where he said Hungary accepts all citizens and legal residents of Ukraine.

“We’re letting everyone in,” Urban said.

Among those who arrived at that moment was a British Ukrainian family with their dogs. “We can’t leave our dogs,” said Vlasta Terasova, coming from Uzhhorod.

The United Nations said most Ukrainians were heading to neighboring Poland, Moldova, Hungary, Romania and Slovakia, but some fled to Belarus, from which some Russian forces entered Ukraine. Some planned to head further to other countries in Europe.

The border point in Siret was crowded with Ukrainians on Saturday and humanitarian groups set up tents a few miles away and provided food and drink to arrivals.

Despite the welcome, the family of the teenage Natalia Murnik did not know where to go next.

“We have no proof. We wait for our friends, and then we think,” she said.

Follow the Associated Press’ coverage of the Ukraine crisis at https://apnews.com/hub/russia-ukraine