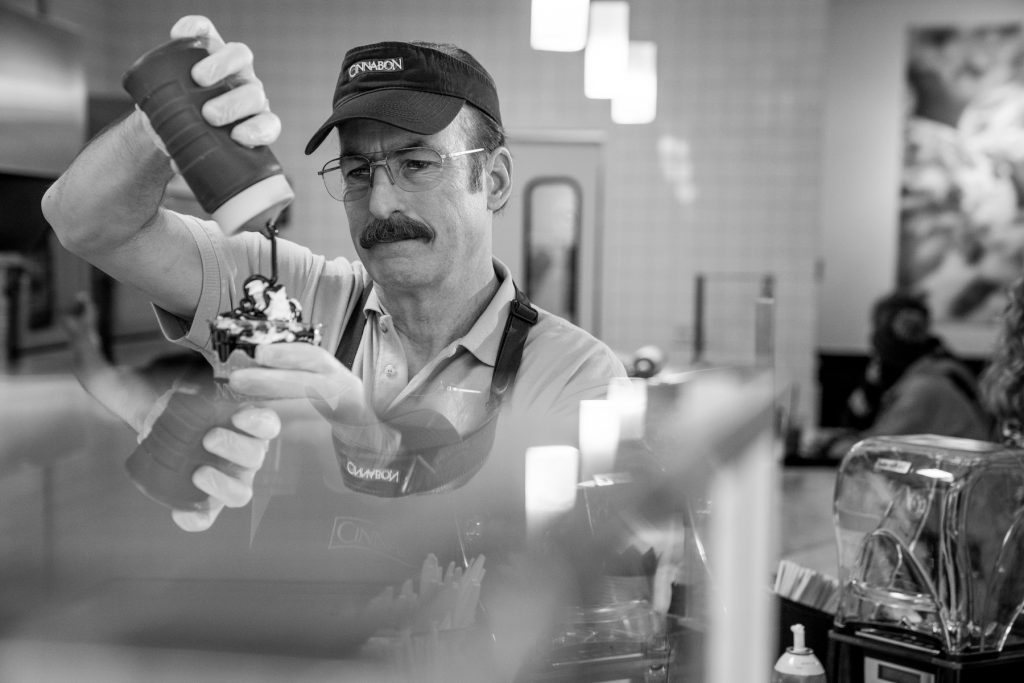 This post contains spoilers for this week The best of Saul on demand“Nebe”, which we summed up over here.

The best of Saul on demand Viewers can be forgiven for assuming that AMC aired the wrong episode this week. “Nippy”, an episode-length journey into the black and white world of Cinnabon’s Gene Takovic – aka the fugitive alias Saul Goodman adopted after the events of Too bad It’s such a story BCS Fans probably assumed they would come at the end of the series. Instead, it arrives three hours after Saul Togo.

Alison Tatlock, Veteran Saul The writer who charts the task of getting Jane out of his mess with Jeff – the cab driver he recognizes as Saul Goodman – realizes that Nebbi’s timing can seem unexpected. But she insists she “felt the pleasure” of the creative team, “and we hoped that even if it was surprising and perhaps even insane, it would be fun for the audience as well.”

Talk to Tatluk with rolling rock On all things Cinnabon Gene, he gave a few hints about what could come during the last three installments of the series.

You didn’t join the show until season four. Before that, what do you think of the Jane strikers who started each season?
I loved them. I was a fan, so every season I looked forward to seeing a snippet of what Jen was about to do. It was so confusing to imagine that we would eventually catch up with this man with the mustache and his black and white world and understand more about him. So I was definitely keen to go on that trip as a spectator, and then was totally amazed that I ended up going on it as a writer.

Saul Creators Peter Gould and Vince Gilligan She was very frank about their lack of long-term planning. When I made the introduction to Gene from Season 4 Jeff, did anyone have any idea where that might be headed?
We knew it would be a problem for Jane. We had some vague ideas put forth about what might happen. The headline for us in the room at the time was, “We want this to have a ripple effect for us in the future for a few seasons.” When we were casting the part, we were pretty sure – and you never know, because things change in [writers] The room – that the character will return and will be more important in future seasons, than the guy who looks in the rear-view mirror in a taxi. So we kept that in mind when looking at the actors.

In this case, I ended up choosing Don Harvey, who was then not available to shoot this episode. Was there any discussion about giving up Jeff’s scheme to do something else?
There were various conversations about how to deal with it. In the end, we put our characters in situations that are impossible for them to solve, in which case, we put ourselves in a difficult situation that we had to solve. And we were so pleased with Pat Healy’s performance as Jeff that in the end we didn’t feel it was a mistake or a tragedy at all.

This is the kind of episode that I imagine many of us would assume would be the end of the series. Without giving up on what’s to come in these last three episodes, can you give us any idea why we’re getting a full Jane episode now?
It’s kind of a contradiction. It felt organic to us. We’re really trying to let the story unfold and follow, rather than plan it too far in any concrete way, even if we have vague notions of where it’s headed. It felt like the right moment to jump into the realm of genes, even though it defies expectations. And in a linear fashion, it’s definitely the wrong moment. In the way of storytelling, it seemed like an amazing way to permeate the world of genes. I felt right.

But why did it feel right to do so now? Did you feel like the audience needed a break after Kim and Jimmy’s fight? Did you want to take a detour before entering the entire Saul Goodman universe?
I like that you phrase it in terms of being so empathetic about the audience needing a break! We love our fans, and we appreciate it very much, but we also love to be surprised and defy expectations – if it makes sense, if it makes sense. Not just in order to do so. There was something delicious here about not going for what we felt like, in the course of the season, like the next logical step, which would be more of the Saul Goodman universe, or another one where we left off at the end. [last week’s episode], and instead just take a sharp turn in a different direction. We were just thrilled and hoped that even if it was surprising and maybe even insane, it would be fun for the audience as well.

How did you conclude that this is how Gene could neutralize Jeff?
Each episode is a team effort. We all discover it together. I felt so lucky and so happy to be the writer of this particular episode. We knew we wanted Gene to figure out how to empower himself and channel Moxy’s Saul Goodman. And how can he do that with his eyebrows hidden and doing everything he can to be as small as possible? And we realized that he had to use the tools at his disposal. It’s in a mall, so it used to be a mall. How do you do a scam in a mall? He has a special genius for being so resourceful in this way. He can use what is in front of him, no matter how pedestrian, no matter how attractive, he can take it and twist it to get what he wants.

When Jane has to stop after Jeff slips and falls on the waxed floor, he does the thing we’ve often seen Jimmy do, and performs a sobbing monologue inspired by true events from his life. He seems more upset about mentioning his brother’s death than he did after Chuck’s death. Is it just the crocodile crying at the security guard, or is there something real about his performance?
At that moment we feel that there is a lot of truth. He has this supernatural ability, under duress, at certain moments, to feel his feelings and confess things he hasn’t said out loud before, and he also uses those confessions and those feelings to get what he wants.

Peter said That one of the early ideas in developing the show was for Saul Goodman to be “a sort of Jerry Maguire for criminals” as he put together and set up teams for different seniors. Did any of this episode arise from wanting to finally revive a version of it?
Interesting topic! I can neither confirm nor deny. I’ll say I don’t remember a moment in the room or a discussion where we said, “Oh, that’s going to be the version that was discussed earlier.” I can’t pretend to know if that, subconsciously in the works of Peter and Vince, might not be an itch that was fun to scratch.

The final scene of the episode Jane is in the store that Jeff just robbed, and he’s wearing a shirt and tie that look like something he’d been wearing like Saul. He holds them to himself in the mirror, but leaves them hanging together on a shelf, as he wants someone else to look at them together. Did pulling that prankster awaken something he wanted back, or was this the last time the man used to be?
It can be explained either way. This could be a wait-and-see question. But to me, this moment of longing is almost a longing for a lost lover. I like how you say he leaves it public for others to see. It’s almost like an actor leaving his costume behind, or even the ghost of something. He cannot fully own it.

Finally, I’m not sure what you can say about this. But if last week’s episode feels like the end of the story we’ve been watching for six seasons, and feels like an epilogue, then what exactly should viewers expect from those three remaining episodes?
That’s for sure, you have to wait and see. And I hear what you’re saying. I also feel and hope that there are still a few lingering questions about how this got to that and what happened, what happened in some of the important moments and the players that we hope to address in the upcoming episodes.