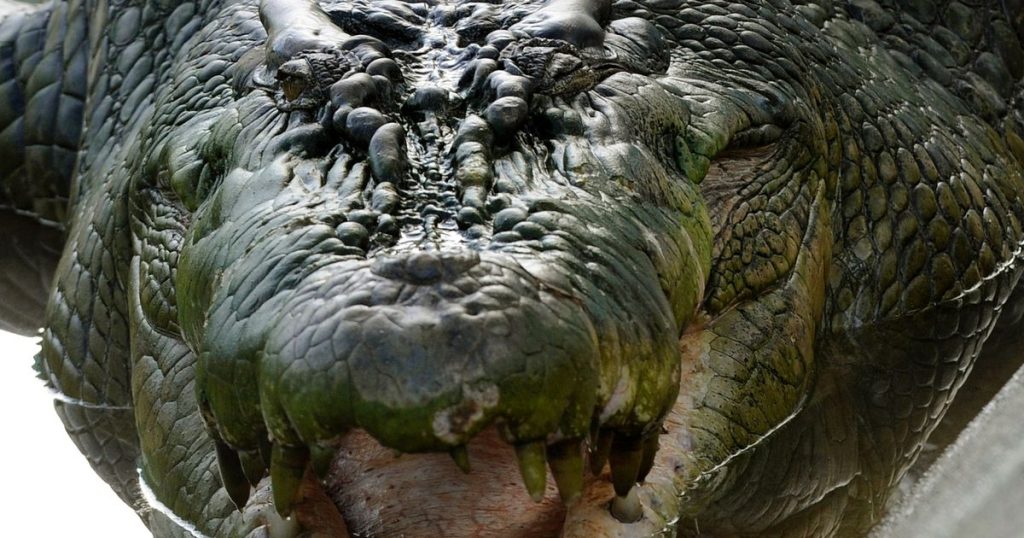 Scientists have discovered a 93 million-year-old crocodile with a small dinosaur in its stomach.

She has been dubbed Confractosuchus Sauroktonos or “Broken Crocodile Dinosaur Killer” by experts and was found with a prehistoric baby in his stomach.

A report by Gondwana Research believes that the huge crocodile grew to about 2.5 meters (6-8 feet) and is believed to have died in a flood.

The reptile is said to be 35% preserved with a “near-complete skull” and fearsome teeth.

Joseph Befitt, a study co-author, told Indy100: “On initial examination in 2015, I discovered a bone buried there that looked like a chicken bone with a hook on it and immediately thought it was a dinosaur.

“The human eye had never seen it before, because it was and is completely covered with rocks.

“The fossilized remains were found in a large boulder. Conglomerates often form when organic matter, or a crocodile says, sinks to the river bed.”

Scientists believe that it was preserved because the mud surrounding the creature hardened due to the bacteria that was present.

Scientists used nuclear techniques to shed light on the feeding habits of a 93 million-year-old crocodile that devoured a tiny dinosaur.
(

Scans of one rock revealed “a small, chicken-sized dinosaur bone in the gut,” however, the species has not been officially identified.

“On initial examination in 2015, I spotted a bone buried there that looked like a chicken bone with a hook on it and immediately thought it was a dinosaur,” Dr. Bevett said.

Tell Australian nuclear science and technology (Ansto): “Digital 3D scans from medical imaging and x-rays have resulted in the crocodile’s physical preparation, which would have been impossible without precisely knowing where the bones are.”

The rock samples had to be reduced to a size that X-rays could penetrate for high-quality scanning.

But the results of the team’s work surprised them and gave them insight into what the reptiles ate at their last meal.

This was pretty cool in itself until the team discovered that the contents of the crocodile’s stomach contained a small dinosaur.

“The results were fantastic in providing a complete picture of the crocodile and its last meal, a small, partially digested dinosaur,” he said.

To confirm that the dinosaur was in the crocodile’s stomach, the team analyzed plant roots and geological features among the rock fragments.

Dr. Bevett said: “The chemistry of the rocks provided the evidence.

Scientists believe that the crocodile died in a flood accident where it was buried and died suddenly.