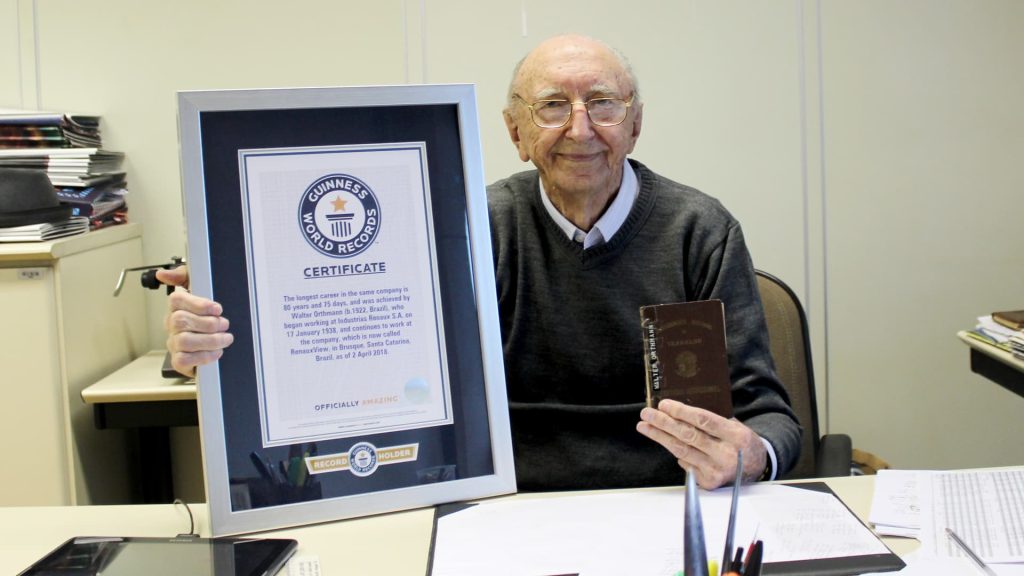 Ortmann was only 15 years old when he started working as a shipping assistant at a textile company in Santa Catarina, Brazil called Industrias Renaux SA (now known as Renault), according to Guinness World Records.

“Back in 1938, children were expected to work to help support the family,” he told Guinness World Records. “As the eldest son of five, my mom took me to look for work at the age of 14.”

He applied for a job at a nearby textile factory and, due to his strong German proficiency, was immediately hired. He continued to work for the same company, RenauxView, for the rest of his career.

After starting out as a shipping assistant, Ortman was promoted to a position in sales, and eventually to the position of sales manager.

Working at RenauxView gave him the opportunity to travel all over Brazil, meeting people from different countries – but his favorite part of getting a job is the purpose, commitment, and routine it brings. He makes sure to exercise every day, and still drives to the office every morning.

His secret to finding a lifelong career you love? Follow your passion, and find an employer that matches your goals and values.

“When we do what we love, we don’t see the time pass by,” he told Guinness World Records, adding that his status as a record holder is his “most proud achievement.” He broke his own record, which he set in 2019 after working at RenauxView for 81 years and 85 days.

Throughout his 84-year career, Ortmann has also learned that the secret to success lies in focusing on what’s in front of you.

“I don’t do a lot of planning, and I don’t care much about tomorrow,” Ortmann said. “All that matters to me is that tomorrow will be another day when I wake up, wake up, exercise and go to work; you need to be concerned with the present, not the past or the future…here and now is what matters.”

Guinness World Records did not say when or whether Ortmann was planning to retire.